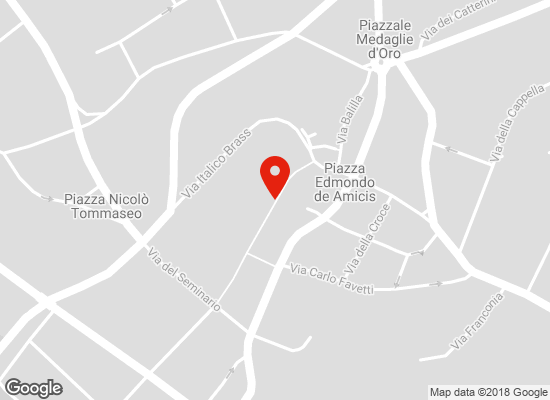 Developed by enlargement of the existing oratory of 1699, the synagogue of the Ashkenazi, representing a German branch of Judaic tradition and rites, was opened in 1756.

The current look of the synagogue with a double entrance portal, rose window and Tables of the Law with Hebrew characters, is the result of restoration work done by architect Emilio Luzzatto in 1894 after the demolition of houses that separated the synagogue from the road.

In the 1950s the restoration of the district gave a new look to the building, separated from other neighboring structures and forming a single faҁade on Via Ascoli.

In the front yard there is a commemorative plaque of remembrance to Jews from Gorizia that were deported by the Nazis in 1943. Next to it there is a stylized menorah, which is a candle holder as a symbol of Judaism, made by Simon Benetton.

The synagogue hall we enter by going upstairs from the ground floor hall, has remained unchanged since the 18th Century, with a wooden gallery and a tabernacle (Aron hakodesh) with four black marble spiral columns, which houses the Torah.

In 1959 the synagogue was closed to worship because so few Jewish families were left in the city. In 1969 became a branch of the Trieste synagogue. After restoration in 1984 it was donated to the City and is today managed by the “Amici di Israele” Association.