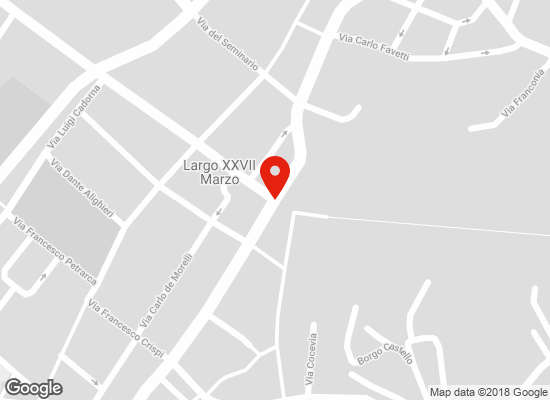 The palace of the Earls della Torre — Thum or Torriani — was built between the end of the fifteenth and the beginning of the sixteenth century as a family town residence. Widely refurbished during the nineteenth century, little remains of the original structure. Purchased in 1819 by the Austrian Treasury, it became the seat of public institutions such as the Capitanato Circolare and the Capitanato District; today it houses the Prefecture. On the left is the entrance of Via Rastello, which takes its name from the ancient wooden rake gate with which access to the village was closed in medieval times. On the right you can see the buildings demolished in 1936 to open the new city road axis of via Roma.

Sant'Ignazio Church was built by the Jesuits between 1654 and 1767 and dedicated to the founder of the Order, with the characteristic two onion shaped bell towers typical of the Central European area. Above the main entrance, the inscription "DIV° Ignatlo be LoloLa soCletatls IESV flInDatorl" indicates the year 1723 in which the statue of the Saint was placed. Next to the church the Jesuit college was built in the seventeenth century, later used as barracks for the 47th Austrian "Baron von Beck" infantry regiment. The barracks were demolished in 1938; today INPS (National Insurance Fund) branch offices are hosted in the building. The column with the statue of the Saint was erected in the second half of the seventeenth century in place of a similar wooden votive artifact.

The old Piazza Grande (Large Square), the heart of the old city, not yet a road circulation area, stretches towards Via del Signori — (today Carducci). The picture clearly shows the triangular shape of the square, where once the market, the city fair, the city band performances and the executions took place. It was originally a large grassy area called "Travnik", which means lawn in Slovenian. Between the fifteenth and sixteenth century it began to be surrounded by houses. The main commemial businesses of the city overlooked the square. It was named alter Vittoria when, at the end of the First World War, Gorizia became part of the Italian Kingdom.

The first building on the right is the historic Paternolli bookshop, the architectural front is not yet interrupted by the opening of the Bombi gallery, built in place of the narrow and almost invisible androna of Coceviutta. On the left, the house of the philosopher Carlo Micheistaedter (1887- 1910), remembered by a stone plaque. The Fountain of Neptune is Nicolò Pacassi's (1716-1779) work. Over the course of time the square has had different names, reflecting the different identities of the population: Anger — from the German piazza"—in the Middle Ages, Travnik, Piazza Maggiore and Piazza Grande. 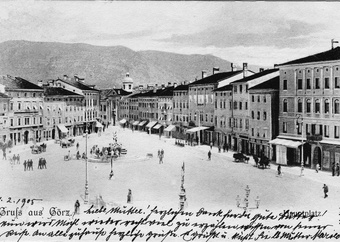 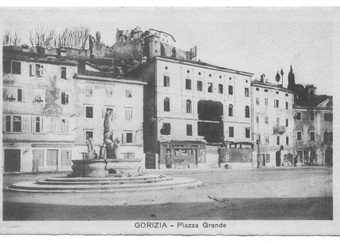 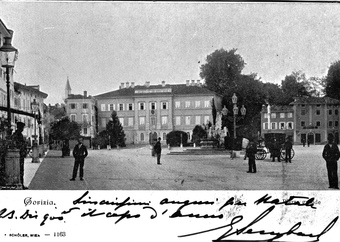