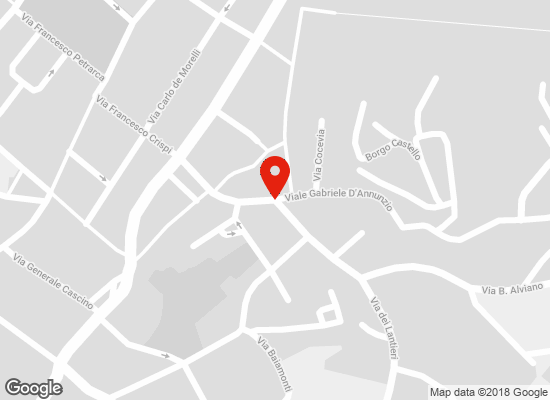 It was called "Piazza del Duomo" but it was renamed "Piazza Cavour" after the First World War. It is the oldest city square, the heart of the village built nearby the Castle during the fourteenth century. Formerly known as platea nobilum — Square of the Nobles — it hosted places of civil and ecclesiastical power and the first noble residences outside the Borgo Castello ("Castello Village): the Duomo built on the church dedicated to Saints Ilario and Taziano mentioned in the early decades of the fourteenth century, the gothic house of Simon Volker of the Ungrispach (1441) and the palace of the provincial States (1545), now the Questura headquarters (central police station), where the administrative and judicial functions were exercised.

The postcard shows the connection between Piazza Cavour and Piazza Sant Antonio. On the left the peculiar Casa Morassi balcony overlooking two squares, rebuilt in 1919 after the destruction of the Great War with the advice of architect Max Fabiani, on the right the building where Giuseppe Tominz (1790-1866) virtuous portraitist of the mercantile bourgeoisie between Neoclassical and Biedermeier, was born. In the background, no longer existing because moved to another part of the city, the covered market designed by architect Leopoldo de Claricini in 1878.

The ancient Riva Castello, with the late medieval porticoes on its sides, the oldest of the "lower town" born nearby the hill where the "upper town" was located. On the left the arched loggia of the Civic Magistrate (municipality) house built in 1572 by architect and military engineer Giuseppe Vintana. The image shimws the destruction caused by the bombing of the city in 1916 and the two from tracks of the No. 2 line, which was abandoned in 1910 and symbolically resumed in the two-lane white stone pavement of Via Rastello. 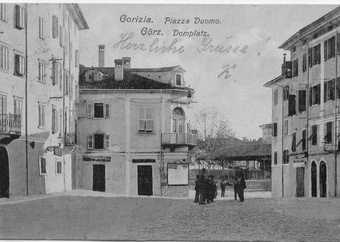 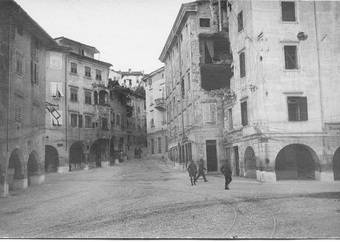