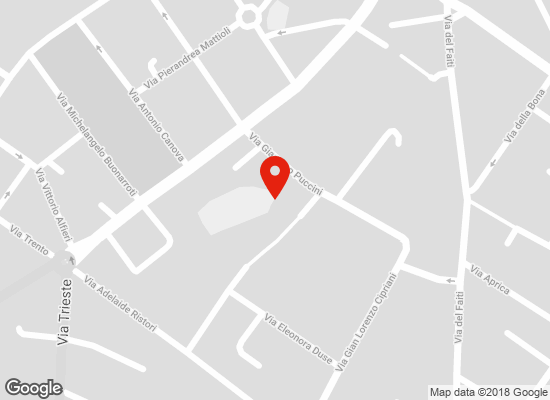 Marcello D'Olivo was an Italian architect, urban planner and painter. He graduated in 1947 in Architecture in Venice. Thanks to constant references to the interaction between nature and technology in his designs, his work in architectural and urbanist fields came to be called “experimentally organic”. After moving place a lot he came back to Udine and in 1987 D'Olivo was invited to Gorizia by the local administration to plan a new Slovenian School Centre in Via Puccini, that was finished in 1993.  The structure, which is oriented north, is formed by three long rectangular wings arranged in the form of an equilateral triangle with open angles and connected by suspended walkways. Each of these wings, that host different schools, has cross-cutting connections which contain access ramps. The outside, punctuated by yellow doors and windows, has a curved grey concrete prefabricated structure, which is both structurally supporting and a light shield. In the middle of the complex there is a gym and auditorium.