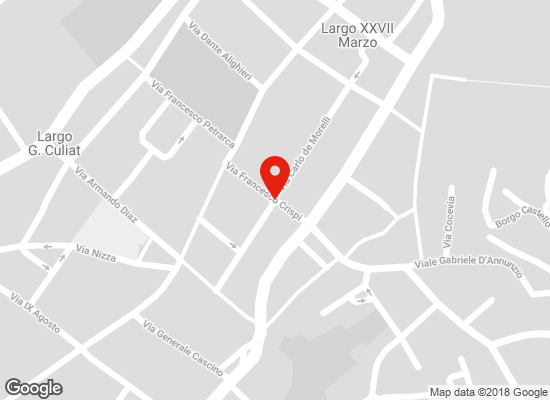 Via Crispi – via Morelli - LIONS

Via Morelli, dedicated to the historian Carlo Morelli de Schönfeld (1730 - 1792) who lived there in n. 39, was formerly known as "via delle Beccherie"; because in that street, outside the ancient customs walls, until the eighteenth century there were the city slaughterhouses using the "grapa" ditch for their activity. On the facades of the houses, the protruding windows on the upper floors allowed the side view even in the winter months, without opening the shutters.

Behind the Chamber of Commerce (1930), formerly Palace of the Guild of Gorizia, by engineer Alberto Cristofori and architect Bruno Sarti, from 1903 was the previous Chamber headquarters with the rear gallery "Francesco Giuseppe"; venue of fairs and exhibitions, built by Polish engineer Joseph Wujtechonsky. The building, the body of which remains on the street, was demolished during the First World War and was never rebuilt.

In the thirties, in front of the Chamber of Commerce was built the Building of INA, National Insurance Institute, with the front porch close to that of the Chamber. The right corner of the building established the architectural line for the construction of via Roma on the grounds of the ancient orchards of the Ursuline Convent, which was covered by Benito Mussolini during his first visit to Gorizia in 1938, to go to the Piazza Vittoria (Victory Square) where he would meet citizenship from a Prefecture stage. 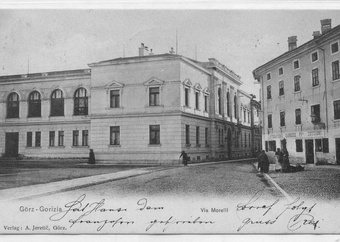 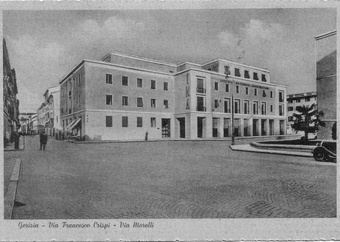