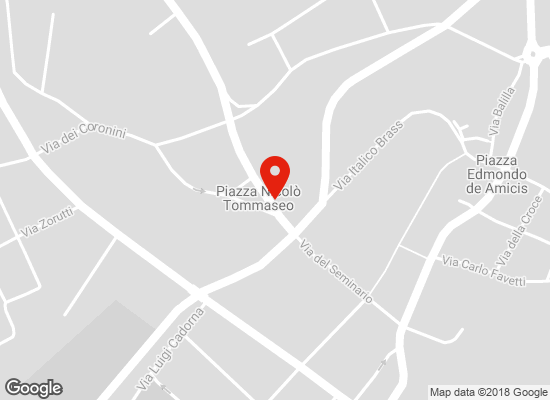 Going from Palazzo Coronini through the old Via dei Coronini we come to Piazza Tommaseo, with a church originally devoted to San Giovanni, built in 1656 near the Fatebenefratelli Hospital, and commissioned by Baron Giovanni Vito del Mestri.

As the place was considered too wet and unhealthy, due to the nearby Corno stream (today it flows underground) in the 1780s the Hospital was moved to Palazzo Alvarez.

Restructured in 1768-69 in baroque style, the church was again completely rebuilt after the War, in the late 1920s. On the faҁade, dominated by a large relief, there is a pomegranate tree above the entrance---the sign of the Fatebenefratelli Order—that points to the origin of the building. The inner part of the church, with only one nave, presents a series of marble altars: the high altar, with the altar-piece of the Martyrdom of Saints Vito and Modesto that comes from the Dominican church of Farra, with other alters coming from the Cathedral.

The majority of Gorizia inhabitants continue to call this square with its old name “Piazzutta,” that comes from Friulian language Plazuta, meaning small square, so called to distinguish it, in the past, from the nearby big square, “Piazza Grande”.