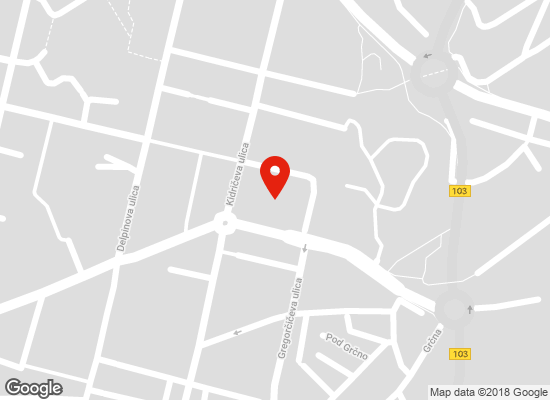 The town of Nova Gorica (Slovenia) was founded in 1947 when, after the Second World War peace treaties, the border divided Gorizia in half and the eastern part of the town was assigned to Yugoslavia. The street Via San Gabriele works as an axis, since it is the only street that directly connects Gorizia and Nova Gorica. On Edvard Kardelj square, where two of the most important roads (Kidričeva and Erjavčeva) of the town cross, there is the Town Hall that was built between 1948 and 1955 to the plans of the architect Vinko Glanz. The palace facade is adorned with statues made by the sculptor Boris Kalin of people linked to the partisan and revolutionary movement. On the first floor there is the Zelena Dvorana (the Green Hall), a hall for meetings, decorated with Slavki Pengov’s frescos depicting some of the most important events in the history of the Slovene Coastal area.

Close to the Edvard Kardelj square is the SNG Theater, the Slovenian National Theatre. This post-modern building was created by Vojteh Ravnikar between 1987 and 1994. It completes the eastern end of the square, continuing the style of the arcades that characterize the area. The Town Hall meeting room connects to the column-pillar theme of the facade, combining the element of the theatre hall with the cylindrical body of a stage tower, forming in this way a complex system based on interpenetration of volumes. The slightly raised main entrance is enhanced by a portal and pilasters on two levels, while the administrative offices are located in the cylindrical adjoining building.

The France Bevk public library, located between the Theatre and the Town Hall buildings, was spearheaded by Vojteh Ravnikar, Maruša Zorec and Robert Potokar and built between 1996 and 2000. The four-storey building is shaped by clear, dynamic, clean lines and has more than 4,500 square meters area of library space. In the basement and on the ground floor are reading, meeting and event rooms, while the second floor houses management offices.