Every day the Dukes of Angoulême used to go to mass early in the morning.

Whilst Louis usually attended mass in the Kostanjevica Franciscan Church, where his father was buried, Maria Theresa went to mass at the nearer Cathedral. The Church, dedicated to the Saints Ilario and Taziano, reconstructed with Baroque shapes and decorations in the late XVII Century, became the city Cathedral in the mid 18th Century after the Archdiocese of Gorizia was founded. She went to the Cathedral in all weather conditions, on the dark winter mornings she walked there lighting her path with a lantern. “The characteristic figure of this foreign lady, always dressed in black, remained for long time in the memory of common people”. 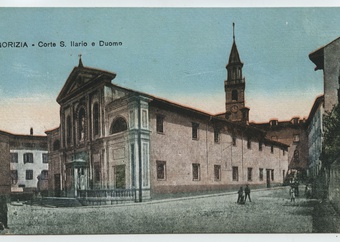